Kali (also called Escrima, Eskrima, or Arnis) is an indigenous Filipino martial art (FMA). It's most widely known for the use of rattan sticks in fighting, although the sticks are meant as a training stand-in for bladed weapons. Although kali has a heavy emphasis on weapons training and footwork, it also has a dynamic unarmed component, especially when drawing in other Filipino martial disciplines such as mano mano (boxing), sikaran (kicking), and dumog (grappling).

Why Is It Awesome?

Have I Seen It in a Movie?

The most popular American movie that features kali heavily is "The Hunted" starring Benicio Del Toro and Tommy Lee Jones. Both main characters are kali practitioners.

If you want to see something a little more representative of training, hop onto YouTube and do a search for "kali training" or "kali fighting" and you'll find a wealth of videos of people with varying skill levels hitting each other with sticks and doing knife disarms and all kinds of things. 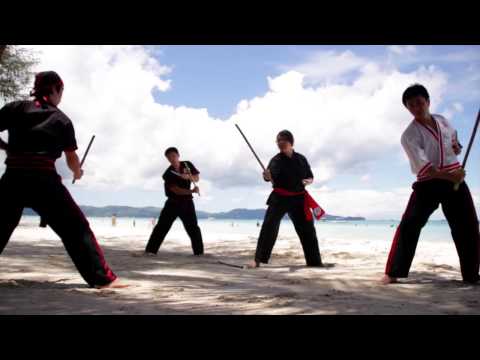 Can I Fight with It?

Kali is a tribal art and has gone through and continues to go through evolutions. There's no emphasis on handing down "traditional kali" techniques that are hundreds of years old. There is a strong emphasis on experimentation, adaptation, testing, and sparring. As a result, kali has adapted well to modern combat realities and is used successfully by both military and law enforcement personnel.

That said, the only way to get good at fighting is to fight in as realistic a manner as can be safely managed, so if that is your goal, you'll need to spar regularly as part of your training. If you're not as interested in that, kali still offers many strength, flexibility, meditative, and artistic benefits most of which can be achieved even without a training partner.

What Style of Kali Does Your Group Study?

We're most heavily influenced by pekiti-tirsia, but we do not limit ourselves to that style. We're also not formally affiliated with any PT organization (or any other kali organization) in any way. We pool together different streams of kali and Filipino martial arts to explore what's effective, fun, self-improving, and sustainable under pressure. If purity of lineage or "school" is important to you, you may not be content with our group. Many kali organizations have a way to start a study group, and we'd be happy to support you in that and, hopefully, have many good moments in training and seminars together.