Pencak silat (PEN-chack SEE-lawt) is a name that covers countless styles of the indigenous martial arts of Indonesia, many of which are named after the village or family they come from. Silat is characterized by close-quarters fighting, a flowing movement style punctuated by sharp force, and is generally known for its rough takedowns and attention to disabling an attacker's limbs.

Why Is It Awesome?

Have I Seen It in a Movie?

The most popular movies that feature silat heavily are "The Raid" and "The Raid 2", followed by "Merantau". As far as movies popular in America, some of the fight scenes in the Jason Bourne movies borrow from silat.

If you want to see something a little more representative of training, hop onto YouTube and do a search for "silat training" or "silat fighting" and you'll find a wealth of videos of people with varying skill levels hitting and kicking each other and doing forms and all kinds of things. 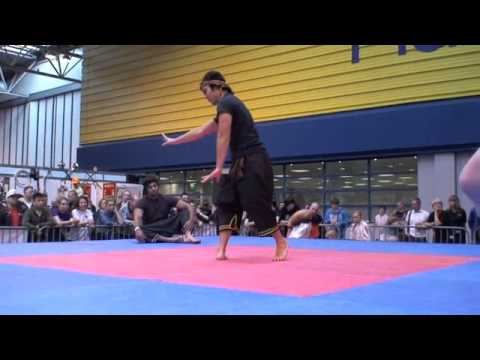 Can I Fight with It?

Silat is a tribal art that is trained in Indonesian villages to this day. It was created to respond to things like village raids, ambushes, and even large animals. Because of this, it's designed to get new people into fighting capacity quickly and dealing with larger threats in a chaotic context. This makes it very well suited for modern self-defense needs.

At the same time, like many martial arts, some silat teachers emphasize testing their style and evolving as the world changes while others prioritize passing down a traditional art. Purely classical silat would probably be difficult for an average practitioner to fight with in a modern day fight on the streets of America or in a UFC match. However, because of the situations silat was designed to address, it adapts very well. Pressure testing and aliveness in training are all key to making sure that what you're training will work when you need it.

What Style of Silat Does Your Group Study?

We use the fundamental movements of Pencak Silat Pertempuran as our "skeleton." The basics of the entire PSP style can be taught in a matter of days, although a lot of training is still needed to understand it and develop skill. PSP itself, like many styles of silat, is a blend of useful material from other silat styles, such as Pamur, Sterlak, and Raja Monyet.

From that basic framework, we draw in other useful ways of fighting and developing fighting skill from other styles, especially the Javanese styles like Cimande and Cikalong with some of the Sumatran Harimau styles for their ground-fighting contributions. Different silat styles have different emphases and address different conditions, so we draw freely from them to help us fill out areas that fit our needs and interests.

Are There Weapons in Silat?

Yes, plenty, and many of them are different than what you may have encountered in other martial arts. We place a lot of emphasis on the stick and the knife and the karambit, as those are functional weapons easy to have on hand in modern situations. We explore other weapons as time and interests allow.

Are There Forms in Silat?

Yes. Forms in silat are called jurus-jurus and generally speaking tend to be much shorter than forms in other martial arts. They are important because, not only are they a way to train movements when you don't have a partner, but because they help you get the bodily sense of flowing from one movement to another, which is key in the unpredictability of combat when people don't do what you want and techniques don't always work the way you wanted.

I Heard Silat Was Too Deadly for Sparring

I have sparred many times with silat and nobody has died, yet. Sparring is not the same as actual fighting, but it is a controlled simulation of the unpredictability of combat, and if you never spar then you'll never know what you're good at, what you need to improve, and if you'll be able to work your techniques under pressure.

I Heard There Was Religion/Magic/Spiritual Stuff in Silat

Silat comes from a country where spirituality is ingrained with all of life and culture, and this has largely remained true even as different religions became popular in Indonesia. Because of this, various silat teachers may have a strong commitment to Islam or animism or another spiritual tradition closely connected with their silat.

Our group trains in America where a person's religion or lack thereof is generally an individual matter. Our silat classes do not promote a religion or contain any religious or spiritual practices. You do not have to belong to a specific religion or have a religion to train with us. We do take the view that violence is to be avoided whenever possible and will sometimes talk about how the martial arts help us become better people, and some may connect that with their own spiritual traditions. The instructor is Christian.